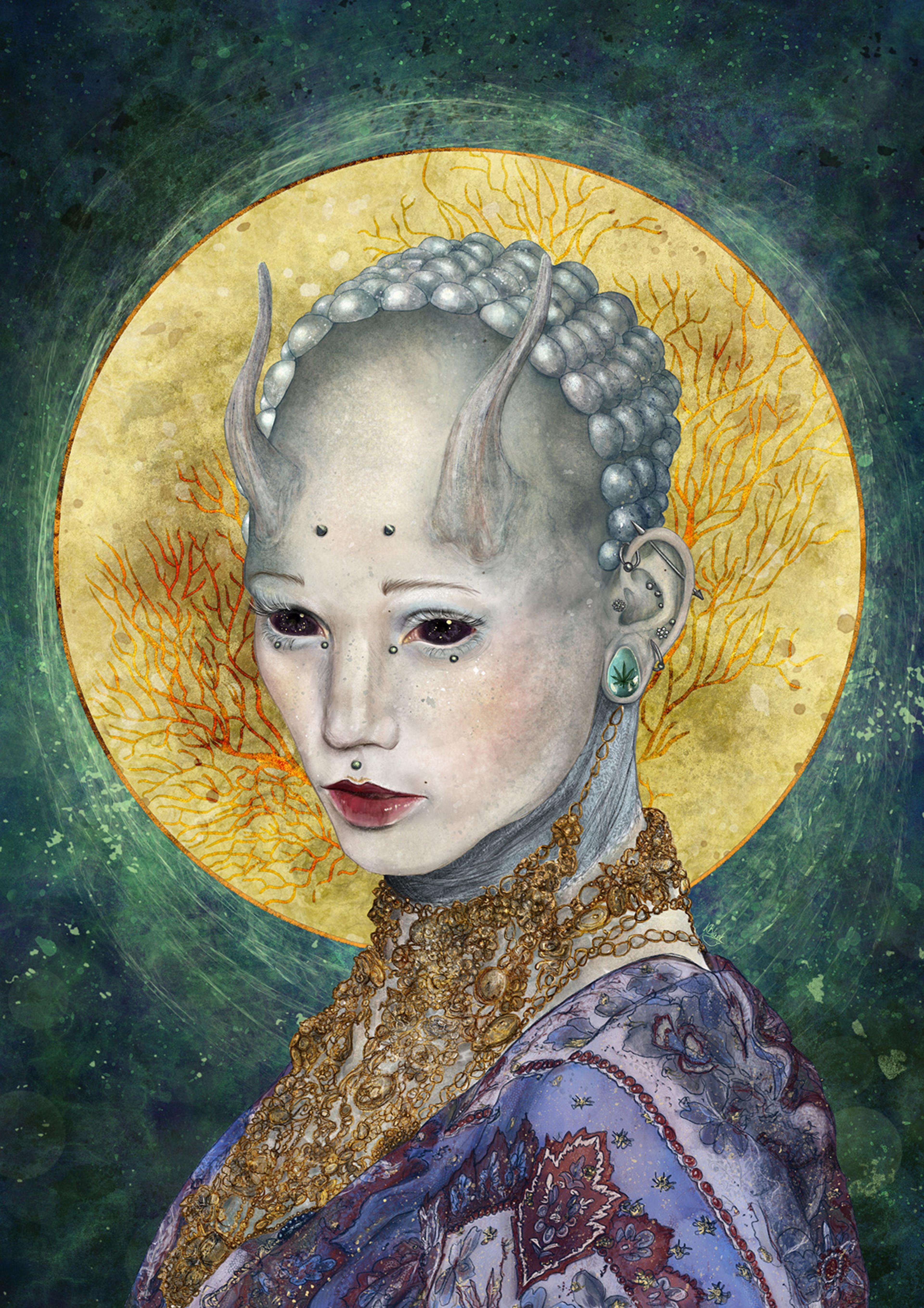 The dreamlike portraiture of Kate Blagodatskikh is at first glance arresting and unsettling, as she explores ephemeral emotions of waking life, as depicted in her most recent series of portraits showcasing little-known phobias. When she creates, she taps deeply into her subconscious, as she puts it, “I can't even say what is primary - an image being transformed into a thought, or a thought being transformed into an image” .

Within her art, Kate sees opportunities for communication with the world. The evoking of thoughts and conversations is the guiding intention in her work, with a particular focus on the elusive and indescribable. There is a restless desire to grow, propelled by the belief that so long as the artist is not satisfied, they live, create, and remain an artist. This is mediated by prioritizing sincerity. She advises, “If you yourself like what you are doing, then the viewer will feel it too.”

As with many of the most interesting people in history, Kate Blagodatskikh is self-taught. Born in Moscow, she began drawing at age 13, attracted to how artists brought their vision and thoughts to life on a canvas. Since her early days as an artist, she’s always had a fearlessness towards experimentation, helping her to quickly find which materials were most suitable for her to work with, and which mediums connected most with her spirit.

Although having graduated with a degree in graphic design in 2021, Kate is quick to point out that an artist should be judged by their works rather than their education. Within her portraits, one can find an assiduous student of the human condition. Beyond the technical necessities of producing quality portraiture, Kate is intensely preoccupied with the abstract. She’s mindful of capturing the zest of a person that makes them unique and interesting while sharing her passion, feelings, and perceptions.

There is a vibrant world within her perceptions, frequently portrayed as ineffable. She often describes feelings and sensations that don’t have a proper name, a poetic way of communicating rife with metaphor. When speaking about what drives her to paint, she refers to sensations beyond language such as “that alluring can't look away feeling that is staring right back into you”. Simultaneously, she invokes an earthy pragmatism, describing the faces of people, “with all their wrinkles, scars and shadows … the viewer decides for himself what is hidden behind these faces”.

One of the major global problems is air pollution. The danger of this is not only that people experience a deficiency of clean air, but also that atmospheric pollution leads to climate change on the planet. Natural factors and human activities are two causes of air pollution. Everyone has a negative impact on the environment. When fuel and garbage are burned, combustion products get into the air, which worsen the state of the atmosphere.

The world's oceans are a huge, but very fragile system, this has become especially evident in recent decades, when the pollution of ocean waters reached previously unknown scales. On the surface of the world's oceans, millions of tons of plastic waste drifts, and, according to experts, more than half of this garbage fell into the ocean from land and only a small part was dumped or washed away from ships. Garbage damages more than 250 species of marine animals and birds and releases toxic substances into the water.

A forest is a complex ecosystem that unites plants, animals, fungi, microorganisms and affects the climate, the state of drinking water, and the purity of the air. Deforestation is a global environmental problem. Burning forests causes air pollution with carbon monoxide, which is emitted more than absorbed. Trees play a key role in the water cycle, helping to maintain a balance between water on land and water in the atmosphere. But when deforestation occurs, this balance is disturbed, which causes the soil to dry out. Scientists' studies have shown that the land left behind after cutting down is unable to return moisture to the atmosphere. As a result, the amount of precipitation is greatly reduced.

She came from deep space, where the world is water and stars. Before divination, she put on luxurious clothes, put on the best jewelry. Then she sat down in front of a deep hollow, and, falling into ecstasy from the intoxicating vapors, prophesied. The priestess personifies our unconscious powers - intuition, premonition, often inexplicable, but quite firm confidence in something. This is the key to that mysterious truth that eludes the logical thinking mind. She knows that the truth that we can express in words is never eternal.

Hylophobia is a person's fear of the forest. Most phobias occur after an incident or childhood memory, and hylophobia is no exception. Parents read fairy tales to children, which play a significant role in the forest, as a rule, the main character can get lost, go astray, or meet wild animals that are of great danger. In adulthood, usually people who are attacked in the forest or severely injured by a wooden object tend to have hylophobia.

We remember what we see and what happens to us. And later, when we relive those memories again, we are afraid that it may happen again. Mnemophobia is an irrational and excessive fear of memories. People with mnemophobia may be afraid to have memories at all, or they may be afraid of certain bad memories. Others may fear losing their memories entirely. This phobia can occur suddenly after a single traumatic event, or develop more slowly over time. Mnemophobia can cause severe anxiety symptoms when patients are confronted with memories or the thought of losing memories.

Eyes are the most expressive part of the face and one of the most amazing organs of the human body, but for some this miracle of nature inspires real horror. This fear is called ommethaphobia, and people suffering from it cannot look others in the eyes, avoid images of the eye, and may even be afraid of their own reflection. Sometimes ommethaphobia can be caused by the fact that a person is afraid to see emotions reflected in the eyes, but it usually develops as a result of a childhood shock associated with the eyes.

Thalassophobia is a fear of the sea and its inhabitants, a fear of sea travel. A person is afraid that he will drown, or that he will be attacked by sea creatures, that he will fall into a sea funnel. The name of the phobia comes from two Greek words that translate as "sea" and "fear". It is worth noting that the grounds for fear can be very different, people are afraid not so much of the water itself, but of the unknown, the depth. At the heart of thalassophobia is personal trauma, severe fear, often associated with childhood. Films about the tragedy at sea, images of sea creatures can become a source of trauma. Some people become afraid of the sea after they themselves have experienced a disaster, accident, or bad acquaintance with marine life.

Tristan is an innately curious autodidact with a focus on the humanities. Over two decades he’s written for a variety of passion projects, work characterized by diligent research and conscientious use of language. You can read some of his essays here: https://soundmind.substack.com/